Two puppies, twice the fun. Right? Not quite. Let’s talk about Littermate Syndrome.

You’re ready to add some much-needed puppy playfulness to your life.

You walk into your local shelter or meet with the awesome breeder your friend recommended to find a new fur friend to take home.

That’s when you spot the adorable pair of puppies clumsily tumbling on the ground as they wrestle for control of a small stuffed duck.

They love each other so much! What kind of cruel person would even think about separating them?

Then they look up at you with their massive puppy dog eyes. You’ve made up your mind.

Adopting one puppy is a major life decision that needs to be made responsibly.

Most pet professionals recommend you only get one puppy at a time to help them grow as independent, confident individuals. While it isn’t impossible to successfully raise two well-adjusted dogs simultaneously, it’s a lot harder, and you’ll have to be careful to avoid a common cause of stunted emotional growth: Littermate Syndrome.

Let’s start at the beginning.

What Is Littermate Syndrome? 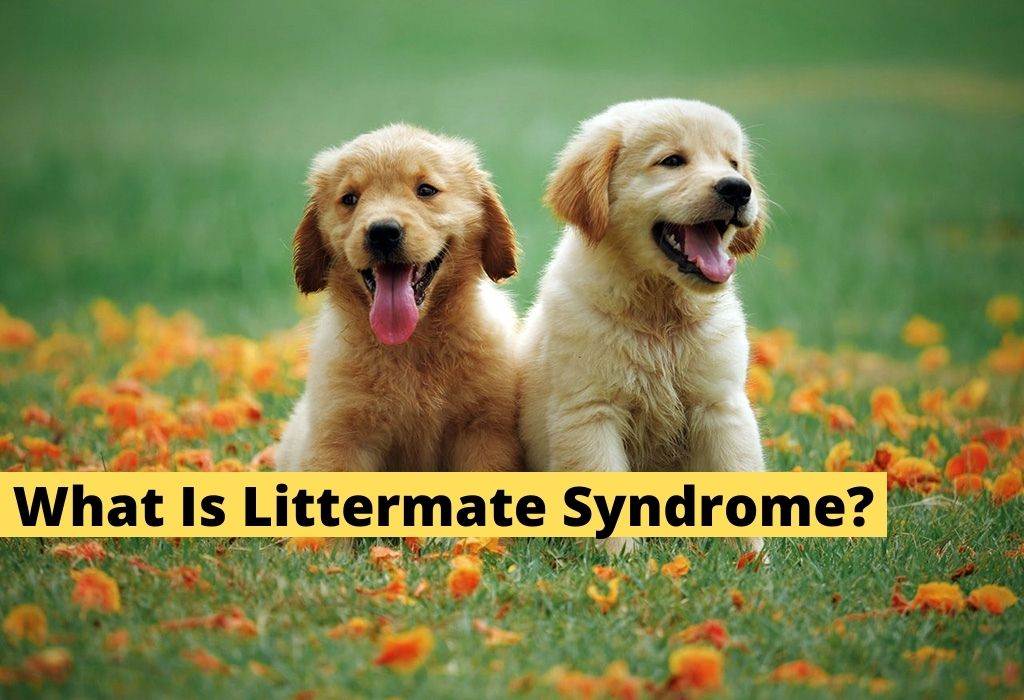 Littermate Syndrome is the name given to the common behavioral problems that arise when two puppies are raised together beyond the typical 10-12 weeks (about 3 months of age) that professional breeders recommend.

These common problems, which I’ll describe below, stem from improper socialization during a puppy’s crucial first 6 months.

At the 3-month mark, breeders recommend puppies be separated from their litters and placed in their new forever homes.

This gives them enough time to mature physically, learn to play, and pick up on important behaviors (like self-grooming), but now they must learn to be their own dog and explore new things outside the comfort of their mother and siblings.

When two puppies are raised together beyond their first 3 months, they can form a deeply co-dependent relationship that insulates them from the outside world.

Whenever some new, scary thing presents itself, your dogs retreat to the safety of their bond and fail to grow through their new experiences.

The root cause of all problems associated with Littermate Syndrome is extreme co-dependence. Any time there’s a new, stressful stimulus, your dogs will retreat to the comfort of their relationship, unwilling and unable to deal with anything new.

The problem is that your two dogs simply can’t be together all of the time. Ultimately, at its most extreme, one will die before the other, which can be emotionally catastrophic to the surviving sibling.

Extreme co-dependence leads to separation anxiety, which sometimes gets so severe that the dogs can’t even be walked separately just a few feet apart without complete emotional meltdowns.

You’d think two dogs who grew up playing together constantly would be great at socializing, right?

Unfortunately, they only learned how to play with each other and haven’t been exposed to how other dogs play.

It’s like they developed their own language. Outside their bond, other dogs don’t speak the same language.

What happens when your dominant dog pushes its way into a pack of strange dogs at your local dog park? Nothing good.

Co-dependent pups neglect to explore and understand the world around them. When dogs don’t understand something, their instinct tells them to fear it.

As a result, dogs with Littermate Syndrome are fearful of anything new, including both dogs and people.

It’s crucial you begin training your puppy from an early age, even as soon as 7-8 weeks of age. And the sooner you can start, the better.

But training puppies is challenging for one major reason: They have no attention span!

(Oh, and those attention-related problems? That’s if you only have one dog.)

There are two reasons:

Early training is so important in your dog’s development, so small mistakes at this juncture can make everything 100 times worse down the road. 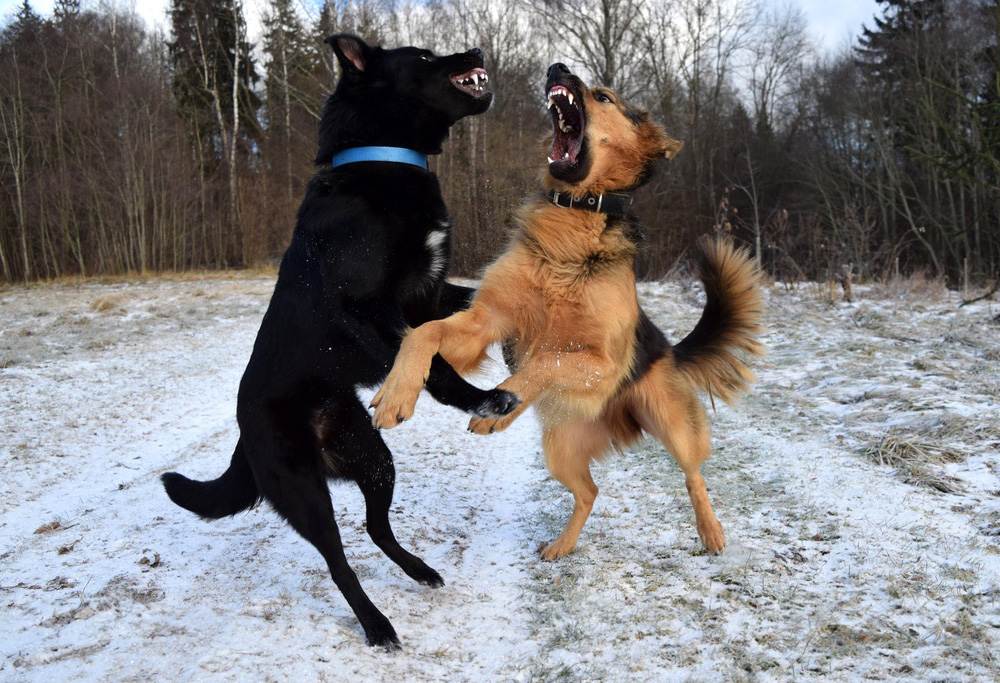 Aggression isn’t as common as the others on this list, but it’s definitely the most serious.

It’s more common with same-sex littermates and usually arises when there’s a bullying relationship where one dog is dominant over the other.

As your littermates age to become full-sized dogs, those aggressive outbursts can become dangerous.

Some owners have even had to separate and rehome one of the siblings to protect the submissive one.

If your dogs display some/all of the above behaviors, you’re probably dealing with Littermate Syndrome.

It isn’t impossible to correct (some tips below), but it’s much easier to prevent your pups from forming this co-dependent relationship from the start.

What follows are early signs that you may be dealing with Littermate Syndrome.

Remember, you’re looking for these issues when your dogs are 3-6 months old.

This is crucial, because correcting Littermate Syndrome is much easier during this window compared to when your dogs are older:

Basically, look for anything that doesn’t present as normal puppy development.

How To Avoid Littermate Syndrome

There are too many small moments in the day to tell you how to handle every one of them, so just keep this phrase in mind: separate but equal.

Your puppies should do everything separately:

The goal isn’t to have your dogs living together in the same house completely unaware of the other’s existence like some cheesy, straight to DVD long-lost sibling movie.

The goal is to raise two secure, confident individuals who can succeed separately and thrive together. 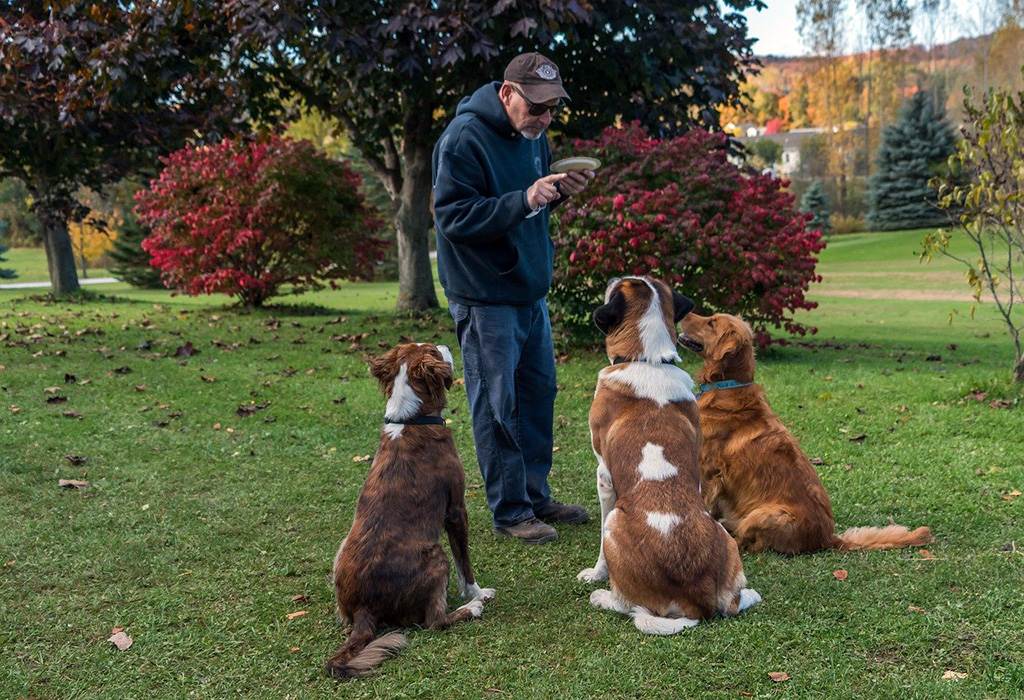 How To Fix Littermate Syndrome

I won’t mince words here: You have your work cut out for you. But assuming you aren’t dealing with severe aggression, there are some things you can try with two goals in mind:

The most important work, especially at the beginning, takes place when your dogs are separated to help them build their confidence and independence.

That leads us to the first step to fix Littermate Syndrome.

First, deal with their separation anxiety

You can’t work with each dog separately until they’re capable of being apart without freaking out.

Separation anxiety is easiest to correct by slow, progressive desensitization to being separated from their littermate.

The best way to overcome separation anxiety is by teaching your dogs to be crated separately. This means you’ll need two properly-sized crates.

You can’t just skip to locking them up in separate rooms. That’s too traumatic and won’t do any good. Instead, go slow.

When teaching your dogs to be OK without each other, the most important thing is to make their alone time fun.

Dogs learn from repeated positive experiences, so give your separated dogs a frozen Kong, their favorite toy, or anything else of high value to distract them from their feelings.

It takes time, but slow and steady wins the race.

Now that your dogs can deal with being apart, it’s time to give them separate obedience training.

There’s no set timeline for how long this takes, but it can take over a year before unbonded littermates can be trained together. Your co-dependent pair may need more time.

Beyond teaching them to be apart and training them individually, it’s important to approach each dog as their own separate dog.

This is when you do all of the things I mentioned in the “How To Avoid Littermate Syndrome” section above. Eating, playing, walking, vet visits — each dog should learn to do these things without the other.

Again, it isn’t like your dogs never see each other during this whole process, but only after they can be content apart and train apart should you consider reintroducing shared activities like dog park trips and doubled-up obedience training.

Littermate Syndrome is a serious problem dog owners face, and with your busy life it can be hard to find the time to raise two puppies properly while avoiding all of the little moments throughout the day that can snowball into bigger problems down the line.

Unless you’re truly up for the challenge of raising two puppies separately, just get one.

You can still get a second puppy later so your dog has a friend. (But experts recommend you wait at least one year to allow your first dog to grow and settle into its new home and routine.)

If you’re worried that your dogs are struggling with Littermate Syndrome, talk to your vet or reach out to trainers and behaviorists in your area to discuss the proper course of action for your unique situation.

How to Choose the Right Dog ID Tags?

Hairballs in Dogs: Treatment And Prevention

How to Become a Dog Rescuer: Step-by-Step DIY Instructions

ABOUT US
The Pet Vet is a family-owned, full-service group of animal hospitals dedicated to providing affordable veterinary care for the life of your pets. The Pet Vet not only offers affordable pricing and low-cost vaccinations, but also full-service and urgent medical care, prescription food, surgery, in-house diagnostics, dental procedures, and much more. We are your established or soon-to-be established local vet in communities including Frisco, Highland Village, Dallas (Prestonwood), and Allen in Texas; Norman and Stillwater in Oklahoma; Bryant, Rogers and Ft. Smith in Arkansas; and Manhattan, Topeka, Derby and Wichita in Kansas. Our goal is to keep your pet healthy by providing affordable preventative and wellness care; and, to be here during your time of need if your pet becomes sick or injured.
Contact us: [email protected]
FOLLOW US
© Copyright 2022, All Rights Reserved